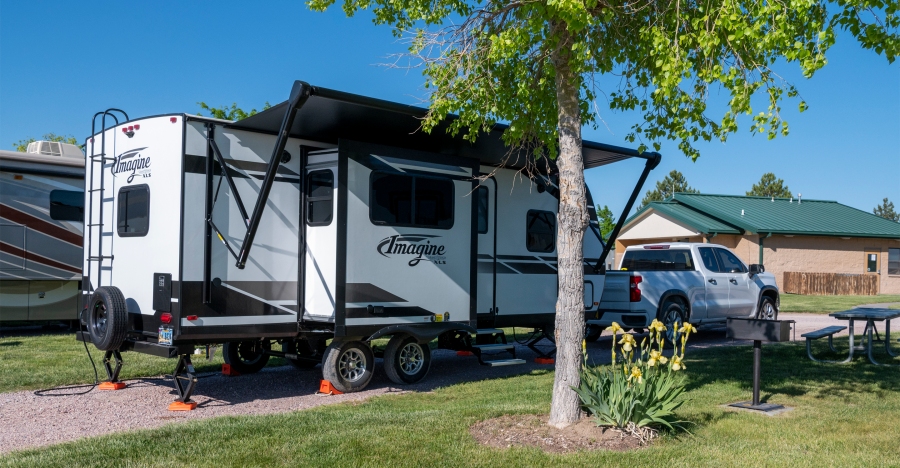 A lot has happened. Most of it good; all of it, in some way, progress. My last Red Cedar Wright post was almost three months ago, when having sold our home in Northern Colorado, we bought a truck, a 2020 Chevy Silverado 1500 with a turbo-charged 2.7L engine. Since that time, more or less in order, we also acquired an RV, then a light trailer for hauling an ATV and building supplies, and then the ATV, a Yamaha Kodiak 700 SE. Oh, and we bought some land — 37 acres on a flat-top wild horse mesa in the south San Luis Valley, an hour north of Taos, New Mexico. Bought two 500-square-foot, 18-wall yurt cabins, each with a long-burning wood stove. Ordered a 10ft x 10ft utility shed, for storing tools. Hired a surveyor to map the boundaries of the new property and mark a fence line on the road. Contacted an excavating company to get an estimate on installing a septic system and cistern. Spoke to an engineer about a site plan.

And as I’m listing these things, I feel a little better. We weren’t just goofing off, then, ignoring the important work of journaling and travel blogging.

But faced with the pull of the page, I’m not sure where to start. Remember when the pandemic year began? For most of us in the U.S., it was March 2020, as cities and states locked down. Fear set in; habits changed. Do we go grocery shopping? How often? How long do we quarantine the broccoli? Why is there no toilet paper at the King Soopers? Can we make our own hand sanitizer? Is this God’s retribution for electing idiots, a parade of off-center commedia dell’arte characters? Pantaloni for presidents and prime ministers. Doctors for straight men, senators for a buffoon chorus, ventriloquist dummies tripping over democratic principles as though they were stage props, and asking some page or other to cart them away.

Removed with them, apparently: integrity, courage, honesty, along with half a million souls. We suddenly live in a time that deserves Giovanni Boccaccio, an episodic human farce-tragedy. Instead, and perhaps there is a Boccaccio among them, schoolchildren were urged to keep journals of the plague year. Poems were written. During this upheaval, along with countless others, my wife and I rebooted our lives. What we didn’t do was write. The plague journals will need to be penned by someone else: I’m reading the owner’s manual for the Grand Design Imagine XLS 22RBE, learning how to discharge human waste from the belly of a travel trailer. No Decameron for me. I wake up to jotted notes about derating the water heater and wiring solar power inverters.

The Imagine XLS, a light recreational vehicle, sits two blocks away on a public street. At 26 feet long it’s too big for the brief driveway we’re given in front of the townhouse, so it settles in gathering heat, locked, chocked, jacked and stabilized, until I learn enough about it to risk a long-haul road trip.

Folks talk loosely about RVs as houses on wheels, and that sounds reasonable enough. There’s nothing new about hitching wagons to livestock; caravans have a long history. But modern travel trailers (dealers like to call them coaches) are less like moving houses and more like flying freighters. There is the towing. The truck needs horsepower, an integrated braking system, a hitch receiver the size of a washing machine, a rear camera, special side mirrors. There are torque wrenches, cotter pins, ball mounts and, in my case, a large wooden mallet I bought just so I could hit something that didn’t work.

The RV has an A-frame, a tongue that accepts a ball on the hitch mount — stop me if this sounds like a bodice-ripper — a coupler, electric jack, manual jill, safety chains, breakaway cable (Jill wired him from Veracruz; “It’s over,” she wrote. “I’ve fallen for the Western Union guy.”) An aftermarket part called a sway control system distributes weight between truck and trailer where they join, and quiets the rocking of the coach in strong winds. You’ll need to know the gross vehicle weight rating (GVWR) of the coach, the towing capacity of the truck, dry weight, curb weight, cargo capacity, axle weight rating, where the public scales are, how to get propane — oh wait, there’s tongue weight — the lead-acid battery charge, which of the water tanks, black or gray, to flush first and how. Whether you need a 30-amp or 50-amp hookup, how to connect city water, how much fresh water at 8.34 lbs. per gallon you can carry and still stay under GVWR, and so on. Hitching up and getting on the road involves a checklist that rivals what airline pilots go through before take-off. The only difference is that no traffic controller lends a hand. You’re on your own, at one point or another along a daunting learning curve.

And yet, nine million RVs are on the roads in the U.S. Most of them don’t run into trees or sling their trailers across three lanes of traffic into a ditch, regardless of the fact that human nature ensures that many of these travelers never bothered to read the owner’s manual (“Four days after the wedding we bought Uncle Grunt’s old Airstream and hit the road. A nice man at the gas station told us the coach was hanging by one of the chains — and he showed us how to use the dump station at the KOA.”) Folks muddle through. And, to be fair, RVers in the United States quickly get drawn into a subculture that is more highly developed and more expertly communicative than the military of a superpower.

For over a month the travel trailer sat. Someone had told me early in the game that it should be level, or else something would go wrong in the refrigerator. The propane thingy that keeps it cold, or some gyroscope, perhaps? Or water pump? Something should be level. But when I mentioned this to the service techs at the dealership, as they were prepping the coach for delivery, a man called Brad shrugged and said, “Well, yeah…but it’ll probably be okay,” with the kind of steely judgement that inspires confidence. I brought a carpenter’s level into the trailer once it was parked back at home, placed it on the counter, and fine-tuned the stabilizer jacks until it could have hosted a troupe of Irish dancers, all high-stepping, and none would have gone sideways and crashed into the vinyl recliners. During the day, every now and then, I opened windows and aired the coach out. Once, I mounted the great sway control contraption on the truck, hitched it up without its spring bars, and drove the Imagine XLS, still off-gassing formaldehyde from new carpet, down the street and around the block. Then, unhitched it. Leveled it again. Baby steps.

Full-timers — RV owners who live in their rigs — sometimes call the first road test of a new trailer the shakedown trip. Now, I’m foreign-born, but my knowledge of American slang was honed on Los Angeles playgrounds from an early age. I would have thought it was a shakeout trip: a shakedown is extortion, when someone takes your money with threats of violence. Of course, I’ve seen the price of RV accessories, so it might still be appropriate. I scheduled our shakedown for early June. There’s a five-star trailer park 96 miles away in Nebraska. It happens to be the retail headquarters of the sporting goods store Cabela’s: the showroom has a spacious RV park nearby that doesn’t take reservations.

The drive out was uneventful but warm: it hit 88 degrees quickly. Sidney, Nebraska, lay in a time traveler’s bubble, the streets near-deserted, the Chamber of Commerce locked for the weekend. I asked in a pharmacy-cum-Christian-souvenir-store for a public restroom, and the earnest woman behind the counter paused a minute and then said, “Try the gas station, but it’s two blocks down.”

When it’s hot enough to grill a baconburger on the sidewalk, walking into Cabela’s is like walking out of the sweltering jungle into Shangri-La. Cascades tumble from high above, bronzed Nebraskans live in harmony with stuffed mountain goats, timber wolves, taxidermy moose. I ask a greeter where I should check in for the RV sites and he says, you can just talk to one of the cashiers — but if you’re interested in buying something today, you can get $40 off with an application for a Cabela’s CLUB card. I notice CLUB is capitalized on the literature he hands me, and almost ask. It stands for something clever, I’m guessing — Camouflage Lovers Unite! Buy! He has seen a lot, this greeter. He is unhurried: perhaps you want $40 off; perhaps you don’t. It’ll be okay either way.

The showroom, too, has an even, fluid grace. The store is cool, clean, and free of mask-wearing folk. They’ve probably all been vaccinated. Not necessarily against COVID-19, perhaps, but being trackers and hunters, at least against malaria or chronic wasting disease. Or bovine spongiform encephalopathy. If this easy-going wonderland is what hunting is about, then I want to kill things, too. I start small, dispatching a 12 oz. Gatorade. And then another. Baby steps.

Back in the travel trailer I hook up water, attaching a pressure gauge and filter, and plug in 30-amp electric from a little power pedestal next to the pull-through site (RVers call this shore power); I extend the awning, slide out the slide-out, turn on the radio and then the speakers for the television, open the propane tanks and begin cooling the fridge, crank up the air-conditioning to bring the inside temperature from 92 degrees to a comfortable 72. Everything functions flawlessly. I flush the anti-freeze from the water lines, flush the unused toilet into the black water tank, test the sink faucet and try the shower; I partly fill the freshwater tank and then drain it. And then I sit back in the vinyl recliners, connected to the park Wi-Fi, and subscribe to tv channels, so I don’t have to watch three hours of Gunsmoke on the few choices available otherwise. About the only thing I don’t do is dump the black water tanks. Leave something for another day.

We’re not planning on being full-timers. But I thought I should know these things. We won’t be staying in too many RV parks. We’ll probably tow the trailer to the wild horse mesa, hook up the solar panels, and live off-grid, boondocking most of the time. The idea that we’d travel across the country, go to rallies, work part-time in a big box store to make ends meet — that isn’t in our plans. But if the last sixteen months have taught us anything, it’s that something wicked is coming around the corner, and we won’t see it until it’s on the bumper.