The previous owner of these 1.7 acres — a wonderful, creative, quixotic human — invested an extraordinary amount of time in projects around the place. Some of these I’ve written about elsewhere: the chicken coop that the foxes laid siege to (and easily conquered); chicken coop 2.0, newly electrified (also overrun, pillaged, chickens carried away in the night); the beehives lovingly erected and tended, if only to give the bears equal time with the foxes. Small pieces of honeycomb still lie in the ravine where the bears couldn’t hold any more. No other traces are left now except floodlight sockets and switch boxes. Herzog’s Fitzcarraldo, who wanted to build an opera house in the Amazon and transport a 320-ton steamship through the jungle, was only slightly more ambitious. But one thing Previous Owner did (I’ll call him Peter Ravenna, not to protect his identity really but instead because it’s a pretty cool name)…one thing Peter did that succeeded brilliantly was building an intricate network of irrigation lines to water pines and fruit trees. They ran along three main routes: down the eastern slope to feed the peach tree and the plums, along the front of the house to water the daylilies, and up the back at the west to refresh what I can only imagine were the shrubs on the hill.

I pulled all of it up. Pulled out branch-lines and sprayers, disconnected hoses, dismantled the timing mechanism in the garage, and left winter cold to crack the green valves at the source. The peach tree died. But the plums and the apples have survived without special treatment. And while the veil is thin tonight I want to ask Mr. Ravenna’s forgiveness. I think, if these sorts of things occupy the minds of those in the spirit world, that he may even understand. My concept of this parcel is a little different than his: I want only those plants that can ordinarily survive our seasons. I want them to shrug off the drought and the near-drought; I want them, under several feet of snow, dreaming of 40mph winds and hungry deer. I want them to be true to the landscape: native plants to feed and shelter native animals. But if it’s any comfort, I’ve left most of his dog’s rubber toys out there, where they’ve collected against the tangle of lilac and chokecherry. 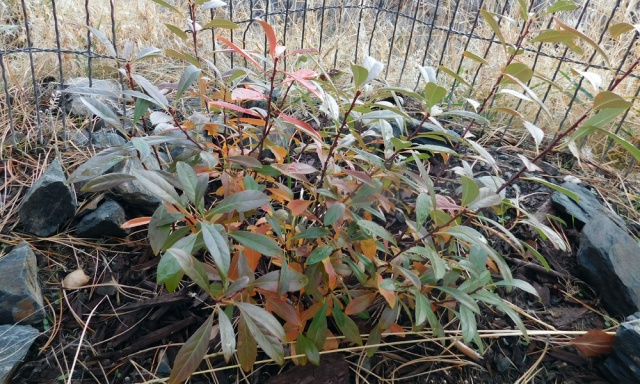 A few years back, working with the same philosophy, I hired a local horticulturist for a few hours. I asked her to come up and do a quick survey. A discussion, really. There was no grand plan. I just wanted her to help identify the trees I couldn’t, to chat about others I could plant when the crabapple finally succumbed to frost, and which firs could be thinned. I still have her notes. She was a serious sort. The pair of Austrian black pines off the deck? Doomed, she said. I forget why. Diplodia tip blight, perhaps. The quaking aspen? Sayonara. You’re not high enough. In some things she was wrong: a blue spruce she identified is probably an Engelmann. Several of the aspens lived and are doing well. But four recommendations stayed with me. She suggested planting Gambel oak (Quercus gambelii) for privacy along the south road. Really, who wants to see me in a hot tub? She thought sunset hyssop (Agastache rupestris) would be great in containers on the deck, and they’ve become a staple for the hummingbirds. Where someone had pruned the apple tree, she advised trimming the stubs closer to the trunk to avoid disease. And she thought sand cherry, specifically western sand cherry “Pawnee Buttes” (Prunus besseyi), would be ideal on top of the eastern slope, where it would hold the soil and provide ground cover. They turn a terrific rust color in the fall, she said.

In that, she was bang on. Pawnee Buttes sand cherry was a 2000 offering from Plant Select®, a collaboration between CSU and Denver Botanic Gardens that specializes in distributing native plants for the high plains and intermountain west. Partly to score some sand cherry I joined the Colorado Native Plant Society, went to their fall plant sale, and picked up three of the shrubs. They’ve all just celebrated their first birthday. We had a small party with funny conical hats and whistles, and I ate most of their cake. The leaves of two of the plants have turned — and it’s really a treat: a color somewhere between overcooked salmon and sanguine Conté crayon. We may not have Portland’s lush emerald shrubbery, but we have a stunning palette of reds and pale yellows this time of year. A beige bonanza. Fifty shades of russet (soon to be a major motion picture about love between potato farmers). I’ve had to protect them. They’re going to wear their cages for a couple more years until they have a fighting chance. And then the foxes, bears, and mule deer can knock themselves out. 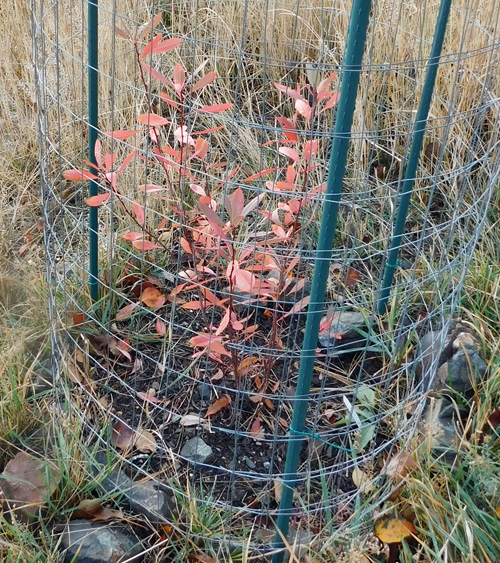