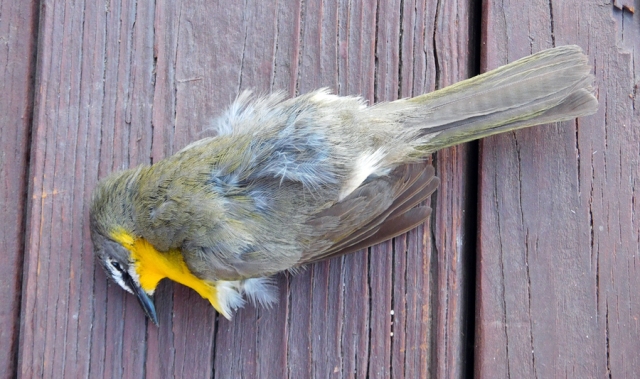 In January of 2013 three conservation biologists, all with a professional interest in migratory birds, published a study in Nature Communications (https://www.nature.com/articles/ncomms2380) titled “The impact of free-ranging domestic cats on wildlife of the United States”. It was picked up and widely reported in the mainstream media. What got everyone’s attention was the claim that cats kill up to 3.7 billion birds annually. Apparently it’s great to be a free-range egg; not so good to be a free-range cat. In the authors’ words: “We estimate that free-ranging domestic cats kill 1.3–4.0 billion birds and 6.3–22.3 billion mammals annually…” Now, that’s a pretty wide range, giving or taking a few billion, but we’re talking billions, so it’s probably a lot either way.

Yes, there are other factors. They call these “anthropogenic” threats, and they throw that word in there so people will skip over it (say what?) and keep the blame on Tigger, the adorable bundle of fur on the back porch they’ve been feeding Nutro Max Chicken Supreme, or some other premium kibble, to keep little Tigger’s bones and teeth strong, and his reflexes razor sharp. But among the other anthropogenic factors (changes in the natural world brought about by human activity) are deaths from contact with manufactured structures — birds getting caught up in wind turbines or slamming into the living room window. Birds have it rough.

(The study’s authors don’t help their argument by publishing a chart like the one above. First of all, that’s a very large rat if he’s drawn to scale — much larger than the bird off to the left — and second, he seems to be getting ready to run up that dark gray ramp and launch himself at the bird, who’s just sitting there, back to the rodent, with no idea of what’s about to happen. That says rat-related bird mortality to me. Not a single cat in the picture.)

I can’t attest to any free-ranging cat killing since ours are indoor-only animals. They sit on the sill looking out at the snow this time of year, shaking their heads and saying things like “poor buggers” and “better you than me, fella”, whenever any living thing wanders by. But we do have experience with birds hitting windows. Not so long ago I found a Chipping Sparrow on the lower deck. He must have smacked into the east window downstairs because he just lay there as I approached, and as I watched, righted himself, took a few minutes to gather his thoughts (“Let’s see…New Mexico this way?”), and then flew off. A Yellow-breasted Chat in June, a year and a half ago, wasn’t so lucky. He (or she, they look similar) was dead when I found him, eyes recessed but sulphur chest and white spectacles intact.

There is something about the death of a bird on a window that bothers us beyond simple sadness. It strikes a personal register, like a bass note in the seat of the soul, and we can’t help thinking, whether or not we pull it entirely to the surface, about all the times we went from one moment to another completely fooled by ourselves. I think about a period after college and during graduate school where my self-image as a companionable, hard-working, and compassionate student in his mid-twenties rose and slept each of those days with me — only to be overthrown decades later in retrospect. For much of that time, frankly, I was probably a jerk, unreliable, insular, and unloyal. It’s only in hindsight, marginally less self-involved and more dispassionate, that I’ve gained a glimpse of what must have been clear to others, and to former friends. I’m unsettled by the correlation: how easy it is for us to deceive ourselves, even in the mirroring glass, mistaking a wall for a skyscape, for a continuous, innocuous illusion.