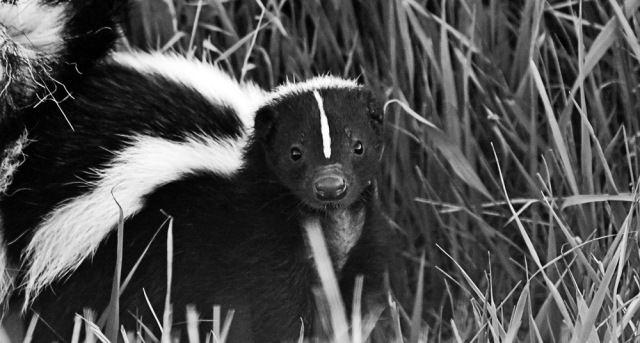 I recently wrote a poem called “Skunk, Twilight”, which I include below. It sometimes happens, despite every good intention to walk during the week, that the time gets away, and especially in these short winter days, the sun is down before you know it. We have barely nine and a half hours between sunrise and set. And then you’re faced with a choice between another brutal evening of police blotter news on television or a bracing constitutional in the gloaming. If you choose the second option — bravely, since it requires effort — you’re not alone. You join the other crepuscular or vespertine mammals. Bats, feral cats, deer, rabbits, the weird sisters, and skunks.

I remember,
when I see the animal wobbling, distracted,
across the road
that the famous blacks of Velázquez
— the rich black even Picasso envied —
were burnt wood or bone,
animal color,
and not an absence at all,
nothing to do with dusk
or the fading light /

likewise, in his dithering,
following a scent trail
to the edge of the cornfield,
the skunk is disconnected
from what is left of the day:
splendid, bold, apart.

And then the hay on each side
freshly mown, the draft horses
in the far stables
apparently alone;
the stag, in its own hour,
a little farther on.

I remember how much beauty
is in the margins,
in back lane illuminations,
our drifting bodies
without the purpose
and accomplishment of daylight,

how I would rather be the first painter
of common things
as Velázquez said
than the second of something much grander,
rather spend the evening
with these rich relations
than back among the waking poor.

Now, crepuscular is a loose term. Relatively few animals are active only at twilight: more often than not they are nocturnal animals just beginning to stir, or diurnal animals who tend to be most active morning or evening. To complicate matters, both predator and prey can be opportunists, shifting patterns in relation to each other, to human activity, to weather, to food sources, and most commonly here, to the arrival of the UPS truck at the bottom of the hill. If you ask Google, “Are deer diurnal or nocturnal?” for instance, the answer will always be yes. Heck, “Are deer diuretic or urinal?” gets the same response. Google is nothing if not agreeable.

But if you were to ask the question about skunks, the answer would be nocturnal. And that leads a lot of folks to believe that if they see a skunk in daylight it probably has rabies. They might be right. It may well have rabies. In fact, we’ve had one recently here, waddling up and down the road and spraying liberally. Another was recently captured on the canyon road after making contact with dogs. It was tested and found to be rabid. On the other hand, it’s not unheard of, depending on the weather or season, for a healthy skunk to be nosing around at noon.

What I find sad about the thing is that it just confirms fear. It’s a pity that some extraordinary animals, bats and skunks among them (we’ll leave raccoons out of the equation), have taken on these primary associations with disease. Rats and fleas never recovered from the Black Death in the fourteenth century in Europe. Their public images were never fully rehabilitated. And how unfair. Just because they didn’t have the benefit of a good PR agency — something that has burnished, if not always saved, disreputable politicians and celebrities. I see a strapping, flinty-eyed flea in a full-page National Guard ad standing in front of an M-1 Abrams tank, combat jacket shielding his little feelers and bitey bits from bitter morning cold. The tagline? “Two months old, and driving fifty-two tons of steel.” The bubonic plague would be a distant memory.

Or picture this. A 30-second video spot. A striped skunk slumped over a changing room bench. A few grass stains from a spring training scrimmage. Maybe he’s a little concussed. But he still manages to get out a few words: “Smelly? Sure I’m smelly. Around here, that’s how we roll.”