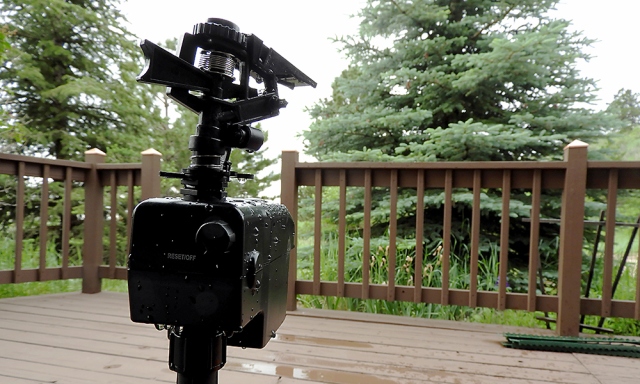 There’s a reason cowboys wear boots and leather gloves. It isn’t fashion. I’m sure some are more vain than others — a few dudes and dandies in the bunch — but it’s a practical business, ranching and cowboying, with more than its share of discomfort. So, however much one might be inclined to slip on comfortable moccasins to check fences and clear a patch of weedy scrub, experience moves you firmly in the direction of good sense. That’s true even if your “ranching” is nothing more than maintenance of a two-acre stretch of foothills.

Prickly Pear Cactus (Opuntia polyacantha) colonizes more of the south slope each year, above the horseshoe pitch. I could pull it, but I don’t. (That’s something else that comes in time: you learn to love a cactus flower, seeing the ragged lemon-yellow cups appear almost magically in the spring and early summer, where before there were only ground-hugging pads, barely above short grass.) But polyacantha means “many thorns,” and we’d prefer they stay on the pads and not transfer to ankles. Around here, plains prickly pear has a habit of growing close by Leafy Spurge (Euphorbia virgata), and if you can’t resist the urge to pull every one of those invasive buggers, you’d be well advised to wear sturdy gloves and thick calf-length boots while doing it. 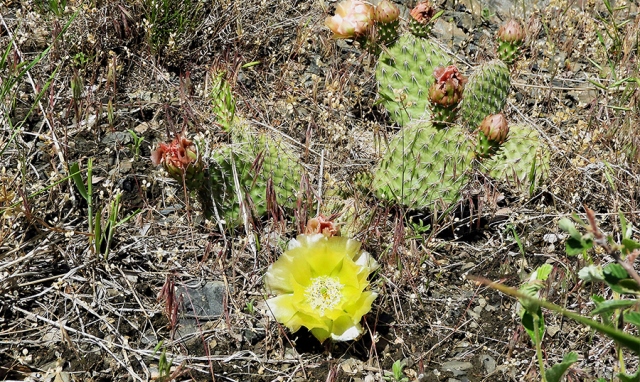 And while it’s true we can’t compete with Australia for poisonous snakes and insects (there are only two venomous snakes in Colorado, and only one, Crotalus viridis, the Western Rattlesnake or prairie rattler, occurs in north-central Colorado; likewise, only a couple of spiders, the brown recluse and the Western Black Widow, cause real concern, and some believe occurrences of the brown recluse are few enough — imports mostly, like disgruntled Angelenos — to be inconsequential), statistics and native ranges are little comfort to someone with a lesion from a months-old bite. I’ve encountered both Prairie Rattlesnakes and Western Black Widows in the last three years, the spider as I was about to climb into the hot tub on which she was clinging.

So, boots and long gloves. I was wearing both when I made a rare visit to the ravine in mid-spring. It has been a wet spring — unusually wet. The snowpack is well above average. The grass is high, lush, and green. The phantom benefits of climate change, perhaps: our semi-arid high plains become rainforest. Evidence of an aborted sacred grove dots a strip of growth between the cottonwood and the chokecherry, along the bank of our seasonal stream. I’ve come to believe that for every sacred site — every sarsen stone circle or St. Nectans Glen — there are a dozen others that never got much beyond planning: more than a few neolithic negotiations, I’m sure, ended with someone saying, “You want us to carry WHAT from WHERE? Piss off!” I had high hopes for my little grove in the ravine. Nettle and bull thistle dashed them, muscling in during those seasons that weren’t either bitter cold or searing hot. The grove is less sacred now for being more wild. Still I visit, suitably dressed, knowing that while my visits are fewer, the mule deer, the feral cats, the occasional black bear or mountain lion still come and go regularly.

Especially the feral cats. One has been visiting late, riling our two male ginger tabbies. Liam goes berserk, bouncing from one window to the next, tail puffed out. In a territorial frenzy he will tangle with anything in his way: the hand that feeds or the brother he would ordinarily be curled up with. Two weeks ago it was the brother, and Donovan got the worst of it. We took him to the emergency clinic just after midnight when we noticed blood on the tile: Liam had gashed the inside of his thigh, deeply enough that it required six or seven stitches to close. About the cut Donovan was equanimous. We might never have known without the blood. But they made him wear a soft collar, the conical sort that juts from the neck like an antique phonograph horn. (Up to fourteen days, the vet said originally.) He wasn’t at all happy with that. The cats were separated at night and one or the other of us stayed up to monitor Donovan, replacing the cone when he inevitably slipped it off and started licking his stitches. Cone on, he’d want his head rubbed. Well-rubbed, he’d fall asleep. Sleep-deprived babysitters, on the other hand, counted the days, and while we counted we also tried to map out a strategy to keep the visiting cat, the nuisance animal, at bay.

We settled on something called a Scarecrow. It’s essentially a sprinkler mounted above a passive infrared sensor. The sensor detects motion in the dark and fires a burst of cold water in an arc, up to 35 feet away. I bought four, plus a brace of good hoses, installing one each on the north and south sides of the house and keeping the other two as backups. They work. At least, if the absence of a problem is proof of a solution, then they work. Who knows? The obnoxious feral might have found better things to do with his time. In the morning I go fore and aft and shut off the hoses. The one on the north side has developed a hair trigger, and the Spotted Towhees and scrub-jays are taking turns setting it off, like a coin-operated shower at the YMCA. The wood rats, up from the shop, where they were chewing on the compost bin, have opened a towel concession. It’s better than the alternative, though: peace has settled in again, and this morning I wake early to turn off the water, so we don’t inadvertently blast a doe and her fawns.

The sun is up, low over my shoulder, just east-northeast. My shadow leaps out along the wet grass, over the lip of the rise and across the deer trail down into the ravine. And when you can see your shadow on June the 18th, long and twisted among the scrub, it means twelve more years of ecosystem collapse. These animals don’t need another scarecrow, of course. They already have one. We’ve been on the job for a very long time.