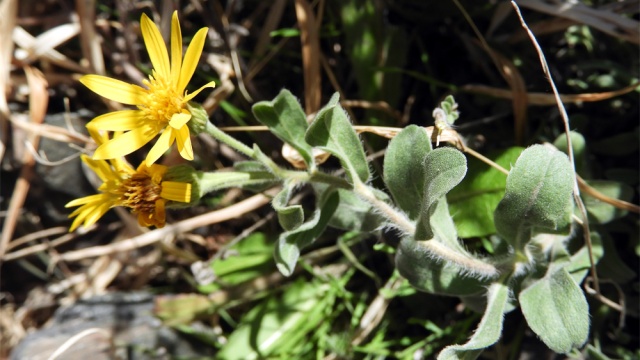 Here’s that picture of the hairy false goldenaster I mentioned in the last post. Now, if you didn’t know it was a hairy false goldenaster (I mean really, look at it) and even if you didn’t know your botany from your Bimini, you could probably guess it was at least a member of the Asteraceae family, the sunflower family. Because — and this is what they don’t always teach you in those online classes — every plant is a member of the Asteraceae family. If it’s not, then it’s going to be reclassified later. They have to do this; otherwise it’s just too complicated. By some estimates there are over 390,000 species of vascular plants (from the Latin vāsculāris, meaning their vessels are so small they can’t have children), and there’s no way they’re going to get undergrads through a four-year university program if they don’t simplify.

Just knowing it’s a member of the sunflower family isn’t going to do you much good. One yellow daisy looks a lot like another. With no other tips, in order to narrow things down, you’ll need to use something called a dichotomous key. I know what you’re thinking: that’s pretty exciting! You’re also thinking that a dichotomous key has got to be a key that not only gets you into your own greenhouse but gets you into your neighbor’s greenhouse as well. And he’s away. Their marriage isn’t going well at all, and he’s been flying around the country lately “on business”. So you find the key, wait for a moonless night, and creep into the greenhouse from the back of the property, along the lawn where no one can hear your footsteps. You pull out the cot, grab the plastic bottle of Everclear he keeps on the shelf below the philodendron, and pass a pretty decent night listening to coyotes and the scratching of beetles on the wooden benches. But you’d be wrong. That isn’t what a dichotomous key is at all.

A dichotomous key is a guide that helps you identify a particular kind of plant by taking you through a series of two-part choices. Each time you match the characteristics of your specimen to one group or the other, you eliminate a whole bunch of things it can’t be — until four hours later you know exactly what you have: a hairy false goldenaster called Euclid who went to school with your sister, and definitely not a run-of-the-mill Heterotheca pumila. The playground is full of those. A dichotomous couplet might be something like this:

1a. Plants that were in the ground…2
1b. Plants you bought at a florist…4

2a. Plants you haven’t accidentally chopped off with the lawnmower…ALIVERACEAE, (p. 299)
2b. Plants that need to go in the compost…3

…and so on. After those four hours you now have a description like this:
Heterotheca villosa (Pursh) Shinners, HAIRY FALSE GOLDENASTER. Perennials, 1-7 dm; leaves oblanceolate to oblong or rarely ovate, sparsely or densely hispid-strigose, eglandular to glandular, 1-4 cm long; heads 1-20 (40); involucre 5-10 (13) mm high, strigose… and so forth. Until you get to the part about the var. pedunculata that states “Heads solitary on long, naked peduncles…” and you know why the book has been banned at the local library.

There you have it. Or you could save yourself some time, take a photo of the flower, have your kid draw a picture of it with crayons, and stick it on the fridge. Less scientific, but just as true.